An Overview Of Morton’s Neuroma 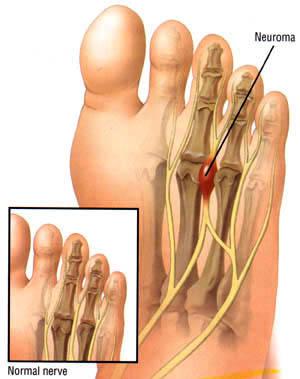 What Is Morton’s Neuroma?

Morton’s neuroma is a benign (non-cancerous) condition where one gets the symptoms of pain on the plantar aspect (sole) of the foot with associated pins and needles going into the toes due to one of the small nerves of the foot as a result of the nerve looking like a tumor or a bulb (like bulbs of a flower or the joint of fibreoptic cables).

Nerves are smooth long tubes like electric wires which conduct information from brain to tissues (muscles, skin, etc) and vice versa. Nerves are either sensory (which only take sensations to and from the skin to the brain), motor nerves (which only take information to & from brain to muscles and thus control muscle movements/ function) or mixed nerves which carry both sensory and motor fibers.

Morton’s neuroma is named after an American Professor of Surgery in Philadelphia (during American Civil War), Prof. Thomas George Morton.

It is generally considered that Morton’s neuroma occur secondary to the biomechanical stresses placed on the nerves leading to over growth of the nerve ( taking the shape of a bulb like the bulbs of tulips or daffodils) and scar tissue around it (fibrosis). It is commonly referred to as entrapment neuropathy as the intermetatarsal ligament, i.e. the ligament between the two long bones of the foot compresses this inflamed nerve which later changes to fibrotic nerve (possibly as a result of repeated / continuous inflammation of the nerve) , which previously was not being compressed as it was not inflamed. Inflammation increases fluid in the area thereby decreasing the space available for the nerve which was living happily before. This can be compared to having a room where one was living happily before but with their friends moving in the rooms, the same room becomes crowded.

Why does Morton’s Neuroma Develop in first place? Am I born with it? Is it because of my foot wear?

The exact pathophysiology (i.e why it exactly develops) is not properly understood. There are two common theories regarding this.

The most commonly described symptoms by patients are that they have felt a pebble or stone in their shoe. They take off their shoe and find that there is nothing to be found in the shoe. Most of the times, the symptoms are when one walks and one does not get much in the way of the symptoms when one is resting or sleeping. This is commonly found in women who have got incidence (presence of this condition) of it about five times high than in men. Common symptoms are as described above and also people feel sensation of burning, tingling and numbness in their toes.

It is diagnosed by taking appropriate history which fits with the typical history as described above and the clinical examination. During clinical examination your doctor squeezes the forefoot between his thumb and the little finger and pushes on the sole of the foot in between the bones, which can cause pain at the respective space between the bones or can result in a click, commonly known as “Mulder’s click” . This click is also commonly felt by the patient when this test is carried out.
Regarding diagnostic investigations, ultrasound and MRI scan are the two most common modalities which are used to diagnose Morton’s Neuroma.
Treatment For Mortons Neuroma